From OER in Education

DARTs can be grouped into two main categories.

Analysis activities These activities use unmodified text. Pupils select specific information from the text and then represent it in a different form. This type of activity helps pupils develop their analytical skills. The following are examples of analysis activities.

Text restructuring Text restructuring involves reading a text and then recasting the information in another format – for example flow charts, diagrams, Venn diagrams, grids, lists, maps, charts and concept maps – or rewriting in another genre. The strategies involved in recasting information are also useful for making notes. Depending on the format of the original text and the recast text, skills used will include

Case study 1 At the end of a unit on the slave trade taught to a Year 9 class a history teacher wanted to use the Durban Conference on Racism, which took place in 2001, as a context for a text-restructuring activity. The end-product was to be a debate on the question: ‘Should the British government pay reparations to Africa for the ongoing effects of the exploitation of its natural resources that began with the slave trade?’ He planned the activity as follows.

Step 2 Explain the concept of reparations using the Durban conference as the context from which examples and illustrations can be drawn. Step 3 Provide the text-restructuring grid [below] for pupils to use when analysing the historical sources provided. Pupils will have seen some of these sources before in a different context. Give them 15 minutes to consider as many sources as possible from the selection provided and make a judgement about Britain’s culpability in relation to each source used. Step 4 After they have looked at the sources, give pupils a fixed time to prepare their contribution to the debate. Explain the format for the debate, including guidelines for participation. Step 5 The whole class, including those who presented arguments, take a vote. In the plenary ask pupils to explain why they voted as they did, selecting the pieces of evidence that carried the most weight for them.

Instructions for pupils Look at the sources provided and complete the grid.

For the purposes of the debate, choose three pieces of evidence that most show Britain’s responsibility or lack of responsibility depending on the overall conclusion you have reached.

Task Classroom assignment: text restructuring 15 minutesCreate your own text-restructuring grid. It can be designed as a general-purpose tool that will support many different learning objectives. You could choose one of the following

Plan the use of your grid into a lesson where the activity is appropriate to the learning objectives. Make a note of how pupils responded to the task.

Many DARTs activities guide pupils into recording what they have learned rather than just asking them to take notes. However, there are times when notes are required, perhaps as an aide-mémoire for later reference or as part of preparation for a presentation.

Wray and Lewis remark that pupils are rarely taught to take notes, yet we expect them to be able to do it easily by Key Stage 4. They comment that pupils will often just copy chunks of text as they cannot prioritise or decide what is relevant, and this may match some of your experience.

Task Case study The notes reprinted below came from a Year 8 pupil who was asked to make notes on pollution from your own reading as a homework assignment. 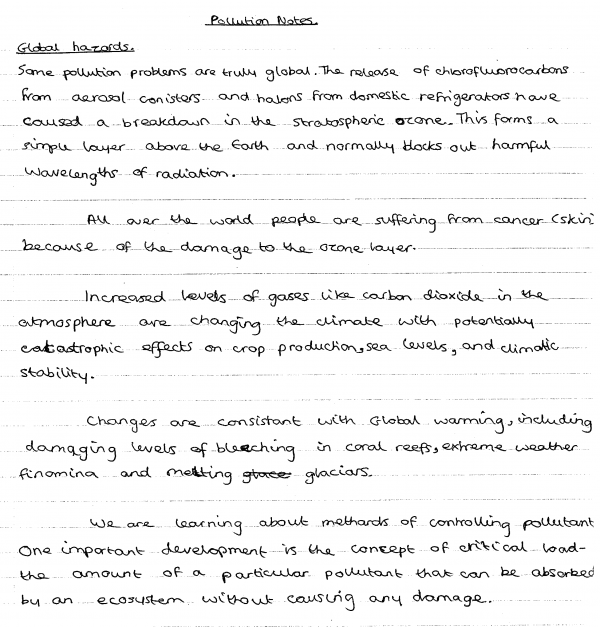 Read through the response and decide

Why take notes? Reflect on