From OER in Education

Introduction to OER4Schools
2.3 - More on questioning

Learning intentions and objectives.
In this session you will learn about:

Success criteria.
To meet the learning intentions you will:

Classroom based activities (with your students, after this session):


If available, large pieces of paper to draw concept maps. 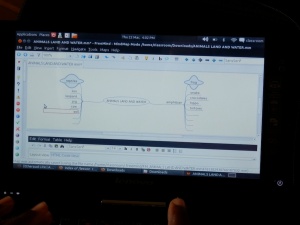 A concept map is a visual way of representing pupils’ ideas around a main topic.

Some examples of what concept maps might show are:

How is concept mapping used in the classroom?

Same-task group work (5 min) on developing ideas for concept maps. See an example of a concept map on the screen. Tell the person next to you a topic from the curriculum that can be concept-mapped; mention advantages of mapping this topic and how mapping this topic can promote interactive teaching. Don’t actually create a map, just think of a topic and at what stage of teaching it the mapping might be useful.

Decide whether you would start with a few given sub-topics or ask pupils to suggest these – this is optional, depending on the subject material. (All the further ideas on branches from sub-topics come from pupils.)

Whole class brainstorm (10 min) on constructing a concept map. Brainstorm to help construct/complete the concept map displayed. Read the background information below before starting the brainstorm.

The main concept that you are mapping is: Learning about concept maps. Suggest any ideas that you can think of related to the topics given below, or suggest new topics.

When contributing ideas to the concept map under construction, remember to:

3 Creating and presenting a concept map

Individual or small group activity: (10 min) Creating a concept map on a topic of your choice Choose a topic from the topics listed on the map you have created together, i.e. from the box ‘topics that can be explored through concept mapping’ or ‘examples’ given above. It can be a topic you will use in your classroom soon. Draw a concept map on your sheet of paper.

As you draw the concept map, think about different ways in which this concept mapping activity can be used in the classroom? TIP: Think of its uses at the beginning, middle and end of a lesson. Your ideas will be discussed during the activity on progress in concept mapping. 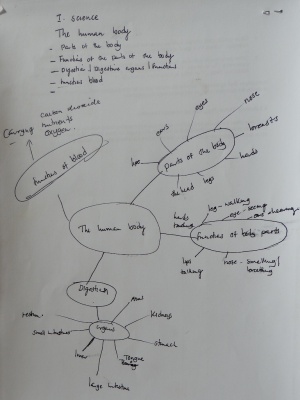 Presentation (15 min) of concept maps. At the end of the activity, 2-3 participants present their concept map for the whole group (each group has 5 minutes). You are role playing as pupils at this time.

During the presentation all participants are actively involved:

The Zedupad resources Subsistence farmers and Growing Maize (see link below) provide an interesting topic for a concept mapping activity. Ideas to be linked include the hazards of using fertilisers and traditional versus modern farming methods. Slide 15 of the Growing Maize resource shows the beginning of a flowchart from seed to nshima. Flowcharts, like concept maps, are a useful method for organising material and finding relationships and connections between ideas. Completing the seed to nshima flowchart is a useful activity that will help students to focus on the main ideas to include in their concept map.

Other ideas for using the Growing Maize resource

You may wish to bookmark this resource and use it later when you have completed more of the OER4Schools course. Other ways that it could be used include:

4 Video: Whole class dialogue on living in the trenches

Observing, thinking, reflecting (10 min): Video with whole class dialogue on living in the trenches In this video, Lloyd, a UK secondary school teacher is facilitating a whole class dialogue during a secondary school history lesson (the all boys class are 12-13 years old). Pupils are discussing if it is possible to imagine living in trenches during the war from historical evidence, which they have discussed earlier in pairs.

See the transcript of this clip below – it may be useful to look at this during the video as the pupils’ voices are sometimes quiet.

More questions for reflection (on this and the next video):

LB Can we understand clip

LB Lesson 3 can we understand clip

Video/LB Lesson 3 can we understand clip.m4v, https://oer.opendeved.net/wiki/Video/LB_Lesson_3_can_we_understand_clip.m4v,This video is available on your memory stick in the video/Video from other organisations folder.About this video. Duration: (Some use of "" in your query was not closed by a matching "". watch on YouTube, local play / download options / download from dropbox)(Series: Video from other organisations, episode N/A)

T: Can we actually really imagine what it would have been like (to be in the trenches during the war)? Is it possible for us to do it? Jonathan, any thoughts on that?

Jonathan: We can't do it, not really.

Felix: Yes, well it probably is, but there's people who lived then, and there's so much information about it. Because there's propaganda. But there's what actually happened and we have quite a lot of sources and, back then when the DVD was made there must have been quite a lot of people that were there.

T: Very good. Robert is going to make a point in a minute that I'm going to ask him. Ricky, what do you think? Actually imagining that?

Ricky: I don't think you could imagine being there unless you've been there and done it.

T: So is it one of those things that’s just too hard for us to imagine?

Ricky: Yes, it's like when you imagine winning the lottery. You can imagine what it would be like, but it wouldn't necessarily be like what you think.

T: Very good. I think that's quite a nice analogy. I mean it's different, but it's almost beyond our experience. Alex?

Alex: I think there are probably bits we can imagine and bits we can't imagine. So we might be able to imagine bits of it.

T: We might be able to imagine certain bits of it. All right. Robert, can I take the point that you made? It links in with what Alex said. Listen to this. This is Robert's view.

T: Ok. What do you think about that Owen? You could imagine what it would look like, but not actually what it would feel like. I quite like that.

Owen: Yes, because on the DVDs or on the films and the poems and stuff, it explains and you can see what it looks like, in wasteland, and you're both in trenches, but you wouldn’t know what it was like to go ages without food or water.

Ricky: That's partially true, but you wouldn't know what it would be like to be shot by a bullet or be bombed or something. You wouldn't see what it looked like either.

T: Owen is nodding his head there in agreement with what you were saying. It's true isn't it? I like that idea. You know, this notion about it’s something completely outside of our experience. Can we really imagine something? I tell you what then, why not add in, let me try, or someone else help me out here. Is it possible for us to imagine, well, yes, what it would look like? I like that Robert and it wasn't what I'd thought of. I thought I was going to write something else on here. Yes 'what it looked like' [writing on board], not 'what it felt like'. You were then able to bring in all the things that Felix and Adill or Joe or whoever it was who came up with this idea (indicates the first three categories listed on the board). So yes there are some things we can describe about it, but the actual feelings are rather difficult.

T: Any other points to make here? Felix?

Felix: Well, about the feelings, every single person's experience with it would be different. Can't really say that... Everybody's got different feelings towards the war, and that.

Felix: You can't really say... You wouldn't know what anyone would have felt like, even if we were there, you would only know what you felt like.

T: Yes, can we ever achieve a common understanding of anything?

Questions for reflection are:

Question on both videos:

Students are seated in a horseshoe arrangement, categorising materials as renewable/non renewable.

Video/11 Brian 4 renewables 11 10 2011 Clip 1.m4v, https://oer.opendeved.net/wiki/Video/11_Brian_4_renewables_11_10_2011_Clip_1.m4v,This video is available on your memory stick in the video/Brian renewables folder.About this video. Duration: 4.03 (Some use of "" in your query was not closed by a matching "". watch on YouTube, local play / download options / download from dropbox)(Series: Brian renewables, episode 01)

As in the last session, use the robot/traffic lights resource to assess your progress as a group whilst doing the ICT activities. This will alert the facilitator to which groups need assistance. Enabling participants to ask for help without fear of judgment helps with the creation of a supportive workshop environment.

7 Connecting with overarching goals of the programme

Open space (10 min). It's now time for the "open space", that gives you an opportunity to discuss issues that have arisen, and to relate those to the broader context of the programme. Do not just gloss over this section, but make time to raise issues, and probe the progress that you are making. You could use this space to:

You will find notes and summaries of various techniques and concepts on our reference page, and you might want to refer to those for clarification during this activity if needed.

8 Follow-up activities for you to try in class

Part A: Try concept maps. Choose a topic that you can teach in your class using concept maps; it could be the one you tried out earlier on paper. Think of some sub-topics for which you will ask your pupils to brainstorm.

Draw this concept map using freemind software on the netbooks. Create a template concept map that you can use in the classroom (just like the facilitator had for this session). Fill it in during classroom activity. You will need a projector linked to your computer for this activity.

Ask your pupils to give reasons for their ideas. Encourage all pupils to be active by agreeing and disagreeing with the idea.

Ubuntu: Applications – Office – Freemind. If an old concept map file opens, go to File menu and choose New to get a blank document. To add sibling bubbles to the original, select it and choose ENTER. To make a child node, INSERT.

Part B: Try out the horseshoe seating arrangement or another new arrangement in your class during a lesson in the coming week.